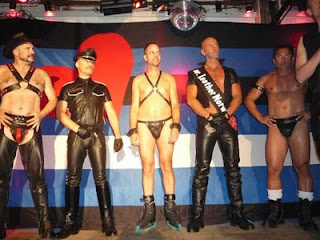 Last night, while engaged in kinky sex, I was blindfolded.

I tend to do sex visualizations when closing my eyes during kinky sex.  Circles and rings that glow and come closer and get larger and such, even sometimes turning into tunnels or portals to what’s on the other side.

But last night, with the blindfold on, the visualizations went a layer further.  I envisioned a ring with a starfield behind it (like a viewport).  In the middle was a rust-colored cylinder covered with scales like a pangolin, with some of the scales acting as lids for huge staring eyes.  The column was moving upward — constantly, like it was infinitely long — and the eyes were looking all over.  Including at me.

I managed to dismiss this one, only to have another viewport come in from the left.  This ring was completely filled with wet green lizard skin, one huge eye, and a couple tentacles with spikes on the end.  And it was bulging through the ring.

Ever hear of H.P. Lovecraft?  Elder gods, the viewing of which can cost you your very sanity?  Yeah, like that.

I ripped the blindfold off and stopped all the sex activity while I fought to stop myself from doing something between screaming and crying.  It took a good ten minutes before I could make any words to describe things.

It probably doesn’t carry across in this description, but… Seriously  Fucking.  Scary.

Since there was another party I wanted to go to that night, I headed back to Schöneberg.  On the way, I passed by the gay sunbathing areas of Tiergarten.  Apparently nude sunbathing is permitted!  I also met a cute Italian boy, Kurt — no, he wasn’t naked at the time — dressed in A&F gear with his collar turned up.

Kurt gave me a heavy cruise in Tiergarten, so I sat down on a bench and got him to approach.  Cute, but in his A&F attire, I figured him for a bit of a twinkie.  (He says A&F is pretty much only worn by gay boys in Germany.  I told him that’s true in the States, too, even if those wearing it don’t quite realize it!)  I offered to invite him back to the hotel, but said he might be scared.  To the contrary, he said it was the red stripes on my shorts that he was attracted by.  And on that note, I had one of the best fisiting experiences of the trip, one that we had to cut short because he was meeting a friend at a local bar.  I would have happily skipped the party that night to play a few hours more with Kurt.

I took the U-Bann out to Prenzlauer Berg, to the bar Stahlrohr 2.0.  (2.0 because it had moved a few years back.)  Several of the guys from the Kellerloch party were there again.

The Stahlrohr party was, of course, a fisting party.  Walking from the U-Bann, I met and talked with Matthieu (I’m doing my best guess for the spelling of some of these guys’ names, you realize), who spotted my black and red leather wristband.  Joachen, who had invited me to Kellerloch, fisted me, although I don’t think he got all the way in.  My ass was getting tender!  I was making lots of animal noises, though, and a bunch of guys stuck their heads around the corner to see who this new guy was whose voice they didn’t recognize.  I then talked for a while with Sebastien, and Marcel and I had a rematch of the previous night, well, of the part with my hand up his ass.

One pleasant surprise I’ve had this trip is the simple willingness of Europeans to engage in safer sex behaviors.  In the States, you find way too many guys who not only like to bareback, they will only do so.  You find ones (often enough to not be rare!) who will call things off if you want a condom to be used (whether as top or bottom), and occasionally ones who will actually be angry with you for wanting safer sex.  (And this almost never has to do with latex allergies.)  Seemingly not so with the Europeans; only a couple even tried any barebacking (including one in a dark room in Amsterdam whom I pushed away, disgusted; he might not have been European, in retrospect), and not a one made a peep at pausing to put on a rubber.

Actually, though, I didn’t do a whole lot of pursuit of fucking, and much of that was in fisting party contexts, so maybe this is the mark of fisters more than general Europeans.  While many prefer to play without gloves (and I could go into the pros and cons of that), it was always a negotiated part of each play session, and none I played with would say no to using gloves or having the top use them.  As I think of it in the States, at the big parties I have been to in Seattle, DC, and Chicago, I do think that this is more a standard behavior of fisters worldwide, perhaps.  But I’ll still think positively of the Europeans in this light, regardless.

I cruised around the Schöneberg neighborhood, visiting the leather shops and such: Connection, RoB, Mr. B, and a couple others.  I bought some t-shirt gifts — a Mr. B shirt that glows in the dark for my boyfriend, a brown and gold Berlin shirt for Rusty (who is house/cat-sitting while I’m away), and two for me, a red Berlin shirt with the bears with entangled tongues and a black Kinky Tulip shirt.  I met a couple guys (Mario and Stefan) from Bavaria outside Mr. B, along with their friend Donovan.

(Just because I name check someone in the blog, doesn’t mean I had sex with them.  Might have wanted to, though…)


This article claims that “cellar door” is one of the most beautiful phrases in the English language.  Can we make a parallel claim that “kellerloch” is one of the kinkiest in the German language?

At the Men’s Shop — “adult novelties”, if you will — I used my certificate from the contest for a video (Fist Pack 20).  I had to spend another 25 DKK — $5 — above the certificate price, but no problem.  (Having since watched chunks of the video, I recommend most any other edition in the FP series.  The first scene goes for like 20 minutes before getting to any digital insertions, which was kind of the purpose of getting the video.  I haven’t watched all the scenes yet, though, so others may be quite a bit better.)

I went back to the hotel for some e-mail (free WiFi) and blog time.  Finally made contact with Ole from X-Rated Leather, then traveled to his shop for measurements.  What sort of a custom piece to get, though.  I want a piece that is special and notable — why have it otherwise? — but it also needs to be mainstream enough that I actually can and will wear it.  (As stated, why have it otherwise?  I have a couple pieces like that, actually, that I can only wear once per city per year, and sometimes not even that often.)  Obviously, he prefers to do a couple actual fittings for his custom pieces, which would not be possible (Denmark being a bit far to go for a fitting).

The idea I had was to get a custom-made vest, with lightning bolts across the back which exactly match the pattern of my lightning bolt tattoos, but with color — yellow bolts with a bright blue “shadow”, to echo Lightning Lad’s costume iconography that they are drawn from.  Per Ole, the vest will be lined inside with leather (rather than having one side raw as is usual in the States, which tends to leave suede crumblies on your shirt, and sometimes even dye stains), with a pair of zippered pockets on the inside.  He’ll also put some yellow and blue piping on the front to echo the colors on the back.  I will send him the computer files from the tattoos so that he can use the exact shape to match.

Is this a €500 (US$750) value?  Probably not, technically, but if you think of the prize as intended to be “a custom piece of leather clothing, value up to” the amount.  And given the physical distance between his shop and my home, I’m satisfied with the result; I think it’s an adequate solution, given time and location and desired uses.

The master’s cap arrived by post this afternoon from the Anco, before I had to leave.  Thankfully!

The hotel in Berlin is quite a trip.  This is a leather-themed hotel/bed & breakfast, with semi-themed rooms supplied with kink play equipment.  (The most well known of these is the Black Tulip in Amsterdam, an obvious antecedent in the name department; Seattle once had the Gypsy Arms, too.)  The hallway was lined with a dog cage, mannequins with straight jackets, a display case with assorted electric gear, and so on.  The room had a sling, a vertical bondage rack, and an adjustable fuck bench, plus a selection of medical furniture.  (And a closet, TV with DVD player, and sink, and a single bed that was originally a medical bed of some sort.)

After a quick nap, I went out to Mutschmanns, then to Scheune (as I had been directed; the crowd shifts from one to the other around 2:00 am).  There I met Pieter (from Berlin) and Graeme (from Los Angeles), and we all eventually went to New Action (where the crowd shifts to after 4:00 am).  Pieter was dealing with a friend of his who was suffering from lung cancer who had essentially moved in with him for the duration.

Graeme was a good piss boy and drained me a couple times.

Pieter gave me a piece of candy, which I later realized was probably Ecstasy, although if it was, I don’t know what effect it had on me, if any.  We also shared a cigarette laced with hash (I think), but again, no effect that I really can identify.  We ended up back at my hotel room, but he left soon after.  He tried to lay a trip on me about not being interested in him and just wanting him as a handy dick or fist, but he was feeling depressed about his buddy with cancer and that was more of the issue, I’m sure.   And maybe some drug effects as well.