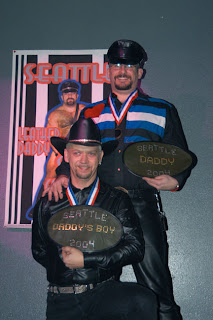 A Distaste of Leather

One shop (A Taste of Leather in San Francisco [no website, apparently]) I went into had the latest issue, which I hadn’t seen yet.  They had two racks of magainzes: the new magazines were wrapped in plastic, in a rack behind the counter, and another one was in the back of the store with thumbed-through (to the point of uselessness) jumble of other magazines, presumably used stock which they didn’r curate at all.  (It was probably worse in that shop that just about anything outside a stuffed-full comics spinner rack, though, indicating that they considered that other magazine rack a lost cause and didn’t monitor it at all.)

I asked if I could leaf through the latest issue.  I was told that I had to buy it first.  I explained my interest in only selected issues, and thus that I needed to briefly see the contents before buying.  I was told I would have to buy it first; they didn’t want the issues damaged like the ones on the open rack.  I promised to buy it if it had the content I was after, and offered to leaf through it quickly right there at the counter in front of the clerk (and the store was otherwise empty, so that wouldn’t have been a drain on his attention).  Nope: I could only see the interior if I bought a copy first, and there were no refunds for any reason.

Needless to say, I left the store.  I then wrote a letter of complaint to the store management.  They sent me a letter back in just a few days, which impressed me until I read the content: “That is our store policy.  You’re welcome to shop elsewhere if you don’t like it.  We don’t need your business.”  (That’s a paraphrase, of course, although the last sentence was explicitly in their response.)  (Note that I don’t blame the individual clerk for adhering to the store’s policy.)

They don’t need my business.  Let’s hope not: I’ve never shopped there since.

(I don’t necessarily bring up old grudges like this regularly.  But a mailing list I am on had a thread today on the subject of shrink-wrapped CD’s and thus the eventual potential of shrink-wrapped books which would have to be bought to be read — or accessed at an in-store “reading station” — and which then could not be returned except in exchange for a copy of the same title.)

You know those big metal donut ball stretchers/ball weights, the ones which come in two pieces that screw together?  Like these?  (Note: link includes photos with male nudity.)

I sure hope I can get a hex key of the right size (about 3.5 mm) at Lowe’s or Home Depot before I have to board the plane to San Jose on Tuesday morning.

(Yes, I did get free.  I had to get a new set of hex keys, and then found the one I lost.  And then on my next trip, I had the single key in my carry-on and they seized it at Security.)

We Should Be On Our Best Behavior

Over Memorial Day Weekend, I attended International Mr. Leather in Chicago.  For those who have never attended, think of it as the “Miss America” of leather contests, plus a huge leather trade show, plus the world’s largest leather bar.  Thousands of leathermen (and hundreds of leatherwomen) from all over the world descend on Chicago for this long weekend of leather pride and debauchery.

In my opinion, this is the leather community’s opportunity to strut and show our best side to the rest of the world.  It’s a chance to wear our finest leathers (rubber, uniforms, etc.), network with like-minded men and women from all over, and prove ourselves to be the community we call ourselves.  Unfortunately, every community has some bad eggs.  Some leatherfolk take an event like IML as a chance to act out, to freak the mundanes, and to push the fact that we really aren’t any better than anyone else.

Most prominent is simply the fact that the host hotel completely fills with people in for this weekend event.  (If there is anyone else staying there, the hotel is foolish, as neither the leather folk nor the other guests really want to be around each other that weekend.)  Because we occupy the entire hotel, giving them 100% occupancy and spending a lot of money on the overpriced beer they sell at the special bar they set up for the weekend (and frequenting the hotel restaurants, and so forth), some of the IML attendees take advantage of the situation.  They are demanding of the hotel staff, they intentionally leave their rooms messier than usual (and think what state leathermen can leave their sheets and towels and such in), and they are just generally rude.

This year, dining at a steakhouse at the hotel, I observed the patrons of the restaurant: about 80% IML attendees, but also a fair number of general public outsiders.  This is a classic interface, not just between us and the staff but between us and the general public.  “No shirt, no shoes, no service” is there for a purpose, both for health code reasons and for simple decorum.  And yet, probably 10% of the leather diners were wearing just a vest or harness.  The most egregious I noted was Mr. Las Vegas Leather, wearing just his title sash on his upper body.  Sorry, man, but dinner at IML is not a sash event.

I wish that the manager on duty at the restaurant had refused to seat each and every one of these men who were dressed inappropriately.  It would have served them (us) right and might have served as a wake-up call to our community.  We are still guests at the hotel and other businesses, gentlemen, and the staff and other diners are people who deserve appropriate dignity and respect.  If we push the envelope too far, we will be told to not return, no matter how much fucking money we bring in.

(Of course, these concerns aren’t just about the leather community.  Written in late June, they apply just as well to behaviors at Pride parades and celebrations across the country.)

There is a line between celebrating that which makes us special and behaving inappropriately, and really, it’s a fairly thick line, easy to see.  Use some restraint.  I’ve got some nice leather ones you can borrow.

The organizers missed the boat on the theme this month and should have gone with the St. Andrew’s Cross.  April 18 is Good Friday, after all!

[Weblog title reference: From the song by Devo.]

That’s certainly a misleading entry title, because it isn’t me.  Or at least I don’t think it is.  It’s been a while since I’ve had the chance to find out.

What I do know is that I draw a distinction between “monogamy” and “fidelity”.  I separate them on physicality grounds.  That is, “monogamy” is about the sex side of things, about fucking only a single person.  “Fidelity”, on the other hand, is faithfulness, being mentally and emotionally true to a single person.  Fidelity is (should be) the true goal of relationships, in my opinion.  We want someone to love, someone to rely on.  What are the roots of monogamy, after all, but a means of forcing fidelity?  (“If he fucks only me, then he is more likely to love and rely on me.”)

Not that this is manageable for and by everyone.  First and foremost, the goal has to be a goal for both members of the couple (or however many are involved; more than two is usually a mark that you’ve already gone past the start of the question).  And you have to have discussed it — not “discussed” it as when one says he wants it and the other says he’s okay with that but secretly isn’t — really discussed it.  And then you have to find a way to make it work for the two (or more) of you: some ways it works might include only fucking others when out of town, or fucking others at their place but never sleeping over and never bringing them home, or a limit on how many times you can fuck someone else, or even only fucking others as a couple.  And for some relationships, strict monogamy is simply the way is has to go, if that’s what both partners want.

The point is, our culture has heavily ingrained us with the idea that fidelity and monogamy are the same thing, and although they are not, we all have our personal levels of comfort with how different they are.  For a separation of the two to work, everyone involved has to be on the same page and willing to compromise to a certain degree.

The compromise between fidelity and monogamy should not be an all or nothing game.  When that happens, someone is going to lose, and a relationship should not be a competition.

(Note that I intentionally chose to use the word “fuck” throughout this, to avoid euphemisms like “play around” or “sleep with,” or even just the passivity of “has sex with.”  Euphemisms breed [ahem] a lack of clarity and boldness. Of course, no term is unable to be misinterpreted; my use of “fuck” should not be read as laying everything at the feet of the “fucker” and excusing the “fuckee” from any responsibility.  It takes two to fuck.)