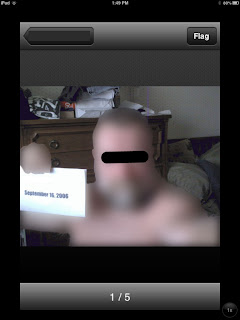 This one doesn’t quite count as an Ass.  The only thing wrong is in what is being presented, not how.  If you must use as pic that is older than the service you are posting it on, remove the date.  Let us pretend that it is a current photo.

We have all seen pics on guys profiles which we knew were not current.  My own favorite brand of this is when you can see the film grain, so you know it is a scanned photograph (and thus at least 10 or more years old).  There is one guy I have seen online in Portland a few times who has pictures in this profile which, based on hair and clothing styles, are at least 25 years old.

Damn, but I hate it when people depend purely on GPS to get where they are going and copy the address in wrong, ignoring all other directions you give them which might clue them that they are totally on the wrong route!

This guy ended up in West Seattle (15+ min away) because he left off the direction character and his GPS sent him to “Ave SW” instead of “Ave S”.  That itself is bad enough (and tells me that GPS itself is problematic), but then he calls, pissed at me as though this were my fault, and says I can come meet him at his place instead, because he has “wasted enough of [my] valuable time”.

I declined.  Once they’re in a pissed-off, state, you don’t want to do much of anything with them.

Adding insult to injury, he then texted me a few minutes later, saying “Please don’t ever contact me again thank u”.  No worries, guy.

(The guy is in recovery and was at an AA or NA meeting shortly before this.  I’ll file that info away for later — not that being in recovery is the problem, but going right from AA/NA meetings to a play session might not be a good idea.  Make sure there is more of a buffer.)

Update: A few hours later, the guy contacted me again in a much calmer mood.  Not really apologetic, but at least not hating on me anymore and again open to playing at some point.  It has not happened yet — and most recently, he got a bit pissy again when I wouldn’t take Thursday afternoon off to play with him because if we played later when it was easier for me, he would have to take Friday morning off.

I think he’s a bit too high maintenance for my tastes.  There are enough of fish in the Seattle sea that I don’t need to work with his issues.  If it happens someday, we will play, but I am not pursuing it hard on my side.