Online Ass d’Jour: I’ll Tell You What I Want, I Want What You Want

A guy hit me up on MR (the mobile app version of DaddyHunt).  His profile was sparse — a single pic of him in a leather vest, and text that read something like “Ready for hot MANSEX.  Always ready” — but certainly no sparser than many guys online.  (That’s a whole other blog post!)


u r visitin so prob too busy to play?

Um, no.  I’m on a cruise site, aren’t I?  Admittedly, some guys are on there with no intent to play, or not to play now (i.e., hoping to set things up for later).  It was Thursday night, so indeed, setting things up for the weekend was one of my goals.  (The other was getting laid on Thursday.)  But if you start off all your communications saying “I know you probably don’t want to play,” it’s little wonder if you don’t get many takers. 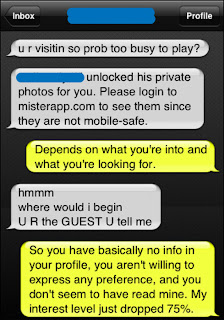 In contrast to his sparse profile, mine is a couple paragraphs long, giving my stats and preferred fetishes and activities, enough for someone to read (hopefully without overwhelming them) to get a good handle on what I would like to do in sex play.  There is no excuse for someone to hit me up and not know what I’m looking for.

He then sent one final message and blocked me.  (Of course, blocking someone this way means they get notified of your final “Fuck you” message but don’t get to read it, so it’s kind of a wasted effort.)
Posted by Jim Drew at 11:53 AM