Most useless CraigsList photo ever?

This ad showed up on CraigsList the other day:

I cannot host but can travel to you in and around Seattle. Real here ... in Seattle ... wet day

All perfectly fine, nothing out of the ordinary there.

And then it had this pic attached: 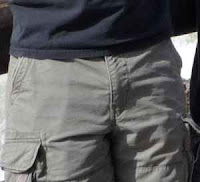 This one, though, what is the point of this pic?  You aren’t showing your “thick 8 inches” (heck, you aren’t even showing a bulge from it!).  You aren’t showing your “nice bod, hairy chest and legs”.  Hell, you aren’t even showing that you’re male!  But at the same time, neither does this seem to be in the same class as a bait-and-switch pic; there is a different level of intentionality attached to using this.

So, yeah, “Most useless CraigsList photo ever.”
Posted by Jim Drew at 11:53 AM